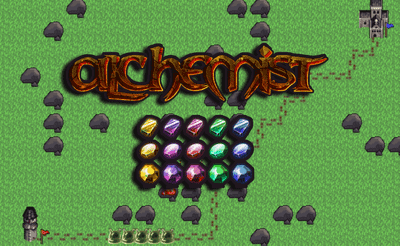 This game is in beta, you are welcome to try it but some bugs are to be expected.

You get 5 gems each round. Keep one, the others will turn to rock. Use the rocks to build a maze to prolong the time the monsters spend walking and taking hits.

For gold you can upgrade your chances to get better gems. And with better gems you can create “special” gems that have abilities like stun or poison. The monsters can be different: fast, mob (less HP – more headcount), boss.

You can combine gems by drag-and-dropping two of the same type together.

Build a long maze but cannot block their path entirely. The monsters always check if there is a path to your base before coming out of the cave, and if it is blocked, they will stay.